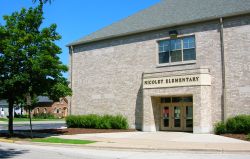 Nicolet Elementary School, located at 600 North Irwin Avenue, opened in 1939. It replaced the old Woelz School, built in 1889, that was one of the first school facilities in the Green Bay community. Woelz originally was called the East River School and it was located on the corner of Cedar and Willow Streets. Eventually the name was changed to Woelz in honor of a pioneer who settled in the area. Perhaps the longest tenured principal at Woelz was Alice Lefebvre who served in that position from 1912-1932.

By the 1930’s, Woelz had become the oldest school in the Green Bay District. The Parent Teachers Association (PTA) petitioned the School Board to replace the aging facility because of “unsanitary conditions.” In addition, there were complaints that the children attending Woelz did not have the same opportunities as other District students because they had no gymnasium, no auditorium and no “decent playground.”

The new school was made possible by a New Deal Public Works Administration grant of $81,000. The rest of the $221,000 cost was funded by a District bond issue. A newspaper article described the facility as “somewhat rambling in style.” It was constructed with “beautiful Brown County ledge limestone.” The school was described as presenting “the proper homelike atmosphere to set well in the residential section.”

Just prior to opening the new school, the PTA requested that the name be changed to honor one of the original explorers of the area, Jean Nicolet. Assessing that there was no neighborhood opposition, the School Board accepted the request and renamed the new school. Nicolet School was looked upon with pride by the community both because of its beauty and also because of its forward looking design. The spacious kindergarten classroom with beautiful wood trim, a fireplace, a loft, and a fish pool remains a tribute to the depression-era craftsmanship that went into the construction of the new facility. 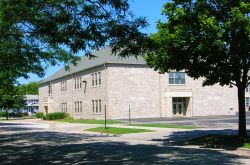 A review of newspaper articles in the late 1930’s and early 40’s indicates that Woelz and Nicolet Schools experienced a great deal of success in their athletic programs. Grade school championships were earned in touch football, basketball and track. At that time, only boys participated in these competitive sports. Once, during WWII, when Nicolet School won the coveted John M. Goos City Football Championship Trophy, the newspaper reported that two Green Bay Packers, Don Hutson and Clarke Hinkle, came to the school to present the award. Both Hutson and Hinkle are now in the Professional Football Hall of Fame. In fact, the Packers indoor training facility is known as the Don Hutson Center whereas one of their two outdoor practice facilities is known as Clark Hinkle field.

In 1993, an addition to Nicolet was completed. A multipurpose room, library, 16 classrooms and office space were included in the project. An attempt was made to honor the original architectural integrity of the facility by matching the exterior brick and windows as well as the floor tile in the older sections. Working in conjunction with the City of Green Bay, adjacent private residential property was purchased and the playground was expanded as a school/park site.

Mary Wiegand was appointed principal of the expanded school and under her leadership the school became a model of the neighborhood school concept that the Green Bay District endorsed. Along with the new construction, a small Family Resource Center was created within the school with proximity to the gym and cafeteria and with access to the playground. Activities sponsored through the Resource Center were offered throughout the school day and into the evening. Summer activities for families, with a focus on youth, were also sponsored. The Parent Teacher Organization expanded its focus to broader neighborhood issues that were discussed at monthly potluck dinner meetings. Partnerships with community businesses and organizations were and continue to be strongly encouraged.

On December 20, 1995, with Headstart funding, the School Board approved the purchase of a residential house across the street on Irwin that was converted to a Headstart Parent Center. Nicolet operates as one of the primary Headstart locations in the District.

With the rather large school enrollment, traffic congestion was a problem at the start and end of the school day. Accordingly, on July 15, 1996, the School Board approved a plan to purchase private property, as it became available, across the intersection of Irwin. Eventually the newly acquired property was converted into a parking lot to limit the street parking that added to the traffic issues.

In 2002, the Family Resource Center and one of the locker rooms off the gym were converted into an examining room, doctor’s office and waiting room. This allowed Aurora Medical Group in cooperation with the N.E.W. Clinic to open the first Pediatric Clinic in an elementary school. Dr. Yolo Diaz, a bilingual pediatrician, joined the Nicolet team and health services are offered to uninsured children in the Green Bay Area.

Under the leadership of current principal, Matthew Heller and his very capable staff, Nicolet has become a model urban school with a strong philosophy committed to learning for all. It is one of the most ethnically diverse schools in Northeastern Wisconsin. Community and parent partnerships remain a key ingredient to the school’s success. Nicolet continues to focus on after school learning including such programs as: basketball, theater arts, running/walking clubs, volleyball, tutoring and leadership opportunities.

The proud vision of Nicolet School is: